How do you determine what size system to install?

To properly size a system, we will evaluate the number of kWh's your home or office uses. This is typically done by looking at past electric utility bills or calling the power company and asking them for a yearly total of your kWh's. In cases where this information is not available (i.e. building of a new home) we would calculate based upon square footage and home efficiency. Click HERE to use our quick system size calculating tool so you can get an good idea of the size system that you need.

Are there any limitations that I should be aware of?

With enough solar panels you can produce as much power as you need. However, there are several things that can limit your system. This includes budget, available square footage for panels and site conditions (i.e. too much shade).

What direction will the solar panels need to face?

To be most effective, solar panels need a South, West or East orientation. East and West facing panels lose about 12 to 13 percent of their efficiency because the angle of incidence is less on panels with that orientation and therefore affects the power output.

What if I have pipes or vents on my roof?

This is a very common issue and there are several remedies for it. We can simply mount the solar panels around vent pipes or we can reroute them for you to give you the best looking solar array possible. Ask your sales representative for pricing.

Are there any permits required and what about zoning?

Permit and zoning laws vary from jurisdiction to jurisdiction. In most cases a photovoltaic installation will require an electrical permit. Our company permits the installation through the city and also walks the rebate application through your utility company. Every installation Infinity Solar does is completed above and beyond code requirements.

What incentives or rebates are offered in my area?

Your Infinity Solar consultant will know about local utility incentives and they will tell you what you might qualify for, however we recommend that you search the Database of State Incentives for Renewables & Efficiency www.dsireusa.org to see what available in your area. Your Infinity Solar consultant will help you obtain your local utility incentives.

Do you offer financing?

YES!!! We offer several plans and options that we can tailor to fit your budget. WE have 5, 10,15 and 20 year finance plans.

When will I get my Return On Investment?

ROI is directly related to your system size and configuration. Most grid-tie systems with a rebate will break even after 6-8 years depending on usage and peak power consumption. Non-rebate systems can take anywhere from 8-11 years before you get your return on investment. The reason that you get your return on investment so soon is because when you get solar you are essentially "locking in" the rate that you are paying for electricity. This is typically around 3-4 cents per kWh.

What services do you offer?

Infinity Solar specializes in the design, installation and servicing of solar PV systems. Our services focus on photovoltaics, and battery backup systems.

What if I need to replace my roof?

If panels are mounted on a roof that needs to be replaced, the panels will need to be removed and reset once the new roof is installed. Infinity Solar will do this work for a straight labor fee.

How does solar work and what equipment is used?

Solar panel systems use Photovoltaic (PV) cells to convert sunlight into direct current (DC) electricity. Solar panel cells are made from silicon and were originally developed to power spacecraft and space stations. The cells are wired together in panels that typically measure about 5 feet by 3 foot by 1.5 inches deep. A group of solar panels mounted on a frame is called a solar panel solar panel array. To provide electricity reliably and safely, solar panel system components typically include an inverter, wiring and optional battery storage and charge controller. Most solar panel systems convert the DC electricity that is produced by the solar panels into the common household form of electricity—alternating current (AC)—by using an inverter. AC electricity can then be used to power your appliances directly, or feed back to an electric utility's grid. The DC electricity can also be stored directly in batteries for later use. In this case, to prevent overcharging or discharging of the batteries, a charge controller is used.

Solar panel durability performance tests are performed as follows: An inch and 1/4 granite slug is fired from tube at 100 MPH. If the panel shatters then it does not pass and must be redesigned. If softball size hail comes down from the sky it will more than likely damage solar panels. In this case it falls under your homeowner insurance to replace the panel. Homeowners insurance for solar panels typically costs about $10 per month. This video will show you how durable and rugged solar panels are.

This is a billiard sized ice ball hitting a solar panel at over 75MPH. Very cool! 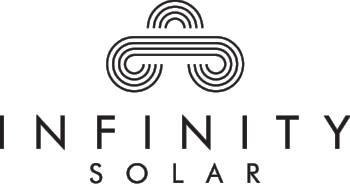 Here at Infinity Solar we know that there is a lot of information out there, some accurate and some not so accurate. Let one of our trained consultants help you with your solar questions. We already did all of the legwork for you!

Infinity Solar has over 10 years of combined solar install experience employs a Master Electrician License #25303 and Our Texas Electrical Contractor License number is TECL # 32960. Talk to one of our experts today. GO SOLAR!

Get A FREE Consultation